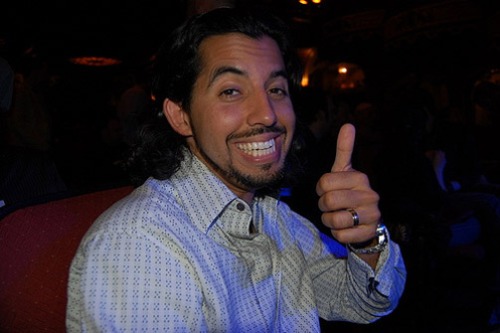 red phone rings. Brian Crecente picks it up with urgency. eyes steely. sweat on his brow.

BRIAN CRECENTE: This is Brian.

VOICE ON PHONE: Brian! Chris Grant. I was just in a meeting with some very powerful people. You ever heard of The Verge?

GRANT (unperturbed): They’re this multi-million dollar media empire. They want to give us a whoooooole lotta money to make the best video game site on the internet. I want you to run it with me. We can hire anyone we want, and it’ll launch in just a few months. Interested?

CRECENTE: Dude, I’ve been trying to find a way to get away from Ashcraft for months. Hold on a sec. (Covers phone with hand, yells over his shoulder to an off-screen Stephen Totilo.) Yo, Steve!

STEPHEN TOTILO (his head pops around a corner from the kitchen – he has cupcake frosting on his lips): Yeah?

CRECENTE: I’m moving to San Fran with Chris Grant to start a new game site. You good to take care of Kotaku?

TOTILO (a wicked smile spread across his face): Oh, I’m more than ready.

(in the background, we hear Totilo already talking into his Blackberry)

TOTILO (as the screen fades to black): Hey, B-A? Got any new ideas for that “What’s Japan’s Fetish This Week?” feature? I’m thinking we should bring it back…

INTRO MOVIE PLAYS — LOTS OF MEMES AND UNICORNS FLYING AROUND

MONTAGE OF CHRIS AND BRIAN CALLING ALL THE HEAVY HITTERS, WHO ARE IN VARIOUS STATES OF UNDRESS/WORK

– JUSTIN MCELROY stops dancing around his home office with Skyrim just long enough to pick up his phone, out of breath. Answers with the nerd voice he used when applying to be on The Tester.

– PHILIP KOLLAR wipes the sweat out of his eyes with inky fingers. The area around and behind him looks like an old-timey newspaper printing factory. Old issues of Game Infarcer line the walls, blown up to poster-size.

– Russ Frushtick pulls his phone out of his pocket while sitting on a curb, nursing a bottle of cheap booze in the rain. Laid off after MTV’s Multiplayer blog shut down suddenly and unceremoniously, he had been unsuccessfully trying to freelance at the various game blogs. It wasn’t paying the bills, and he was about to lose his house. His face brightens when he sees the Caller ID.

GRANT (authoritatively): All right guys, glad you could all be here. You are the finest video game journalists in the world, and with our powers combined (slowly raises clenched fist into air while speaking), we will create the greatest video game Web 2.0 site in the world! We’re gonna take all the lessons of what not to do from Kotaku (starts ticking off points on his fingers), and GamePro, and freakin’… EGM, and we’re going to make something different. Bigger. Better. We’ve got the connections, we’ve got the money, and we’ve got alllllll the talent.

KOLLAR (raising hand from where he’s seated at the table): What are we going to do different, if I may?

FRUSHTICK (slightly confused): So, like… those things that are shutting down every month?

CRECENTE and GRANT together: EXACTLY!

GRANT (continuing): But this will be different, because we’ll have sparkly video content and all the big names in game journalism and we’re gonna cut down on the snark. Plus, we have $3 million in venture capital funds so we can get pretty much any story in the world.

KOLLAR: There’s one thing missing though…

MCELROY (jumping to his feet, almost falling over): CHICKS!!!

(the whole room looks around. realizes that, yes, they forgot to invite any female game journos.)

(congratulatory jumping freeze-frame high-fives all around. they decide to document the progress they’ve made, Indie Game: The Movie style. a documentary is announced on the same day it’s revealed that Nintendo Power is closing up shop after 24 years. four months after the first announcement, polygon.com still hasn’t launched.)

3 responses to “The Leaked Screenplay for Polygon’s Documentary, “Press Reset””