The Harsh World of New Leaf

MONEY. I need more money and I need it yesterday. Because then my house expansion would be finished today.

No, Blathers, I don’t want to hear about that time you were a young bird again. You used to have a lot more to say.

No thanks, Kapp’n, but I’ve already heard this song about pewcumbers. Sing the one about farts or I’m skipping this boat trip. You’re in the way of my tropical fruit collecting.

I don’t even try to beat the tours anymore. Medals are practically useless, but bells? I can get over 50 bananas on one 8-minute Tuna Kahuna tour. That’s a lot of scratch. And I need it, because making my Gyroid basement bigger is costing me half a million.

END_OF_DOCUMENT_TOKEN_TO_BE_REPLACED

The game most comparable to LEGO City Undercover: The Chase Begins (the 3DS prequel to the Wii U’s LEGO City Undercover) is probably Grand Theft Auto: Liberty City Stories on the PSP. Both offer portable takes on their more fully featured console brother. Both offer open-world experiences that had, up until that point, been unattempted on their respective handhelds. Both offer an approximation of the full experience that check all the boxes. You know, like the Guitar Hero game on the DS. It’s just like playing a fun game.

Technically, on paper, both The Chase Begins and Liberty City Stories should be perfect handheld versions of these huge, expansive, incredible console games. But both fall short, and miss out on the “magic” that made the home versions so memorable. Simply, if you had only played the 3DS version of LEGO City Undercover, I don’t think you’d really “get” what makes the Wii U game one of my favorite games of all time. And even though they’re technically different games (in the most literal sense of the word) and follow undercover cop Chase McCain through an earlier part of his police career, they’re set in the same world and you’ll do many (read: all) of the same things. But it’s just… not quite as fun. And that’s without even mentioning up the pop-in, the fog, or the lack of a turbo button and things to discover on bridges. END_OF_DOCUMENT_TOKEN_TO_BE_REPLACED

After spending a solid 20 minutes on one battle Draw-ing 100 Blind spells for each of three characters in Final Fantasy VIII on my PSP last night, I realized something. I’m not sure why I didn’t realize it sooner, like when I spent a solid summer playing nothing but Animal Crossing: Wild World – even then, the playtime was largely on the toilet until my legs fell asleep – or that time I had to teach Ultima to everyone in the Game Boy Advance port of Final Fantasy VI, one Cactuar at a time, to prepare for the final battle. I don’t play handheld games for the riveting story, or “meaning,” or immersion (although finding those things is great). I use handheld systems, including my smartphone, as a time suck. I play them to waste time, or kill time, or do any number of other unspeakable acts to time because – to me – they are merely a stopgap until I can get back to my “real” games on my home consoles.

I Finally Figured Out Why I Don’t (Can’t?) Like Monster Hunter

I tried to like Monster Hunter, I really did. I put a solid two weeks into the PSP’s Monster Hunter Freedom Unite and didn’t even get past the dozens upon dozens of tutorials. Protip for developers: I can learn more than one thing per introductory mission – it’s not against the law.

Then when the 3DS and Wii U Monster Hunter 3 Ultimate demos came out recently, I put a lot of time into them, as well. (It didn’t take long to realize that they’re exactly the same – a fact I was not aware of before trying both.) I keep giving the series a chance, however, because it’s a brand new Wii U exclusive coming out this week, and I would love nothing more than a never-ending world to explore with my underused Wii U.

Imagine: one game that can absorb your life for months… Sigh. I feel I am doomed to wait until Dark Souls 2 before I can find another game that will sink its barbs into me and never let go like I wish one would.

Each game in the Monster Hunter series is pretty much the same, and I think I’ve finally figured out why it doesn’t push the buttons I need, and why it probably never will. See, I grew up with RPGs, and Monster Hunter is definitely one of those. But it’s the wrong kind. END_OF_DOCUMENT_TOKEN_TO_BE_REPLACED

Review: The First Ten Minutes of Myst on the 3DS 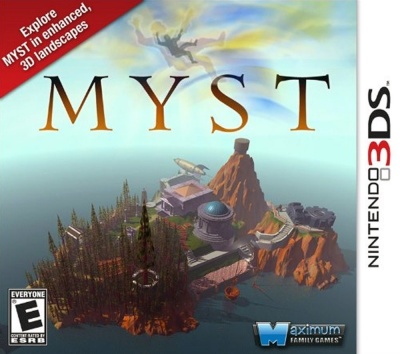 Myst is important. It was released in 1993 and remained the best-selling PC game for nearly a decade before finally being unseated by The Sims. It caused millions of us upgrade to the then-new CD format, with its impressive full-motion video, sweeping orchestral soundtrack, and cutting-edge world design and graphics. The neatest part? It was originally a Mac-only game.

Since ’93, Myst has been ported to something like a dozen different platforms, and most recently it has been spreading like a virus throughout the handheld realm. Now that the graphical and sound prowess of our portable systems can match that of a personal computer from 20 years ago, it seems like a perfect match, especially what with the touchscreens and stereo sound.

There is a sort of purity in Myst that seems untouched by time — obtuse puzzles, a go anywhere/do anything atmosphere with an unhurried pace, and a deep lore that has to be peeled back one layer at a time. The 3DS version has all of these things. Unfortunately, it is unplayable. END_OF_DOCUMENT_TOKEN_TO_BE_REPLACED

Review: Paper Mario: Sticker Star: So I Can Finally Blog About Something Else 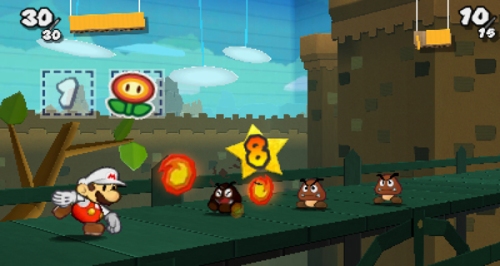 Paper Mario: Sticker Star is a very good game. The sticker battle mechanics take a minute to wrap your head around but then are great, requiring a lot of rhythmic skill to master. The story, characters, and world contain a level of charm and tongue-in-cheek humor simply not found in 99% of all other games. And the shiny stuff, secrets, and collectibles pushed every one of my magic buttons that keeps me playing a game. In fact, I haven’t been this completely into a game since Skyrim. And on a handheld with PaRappa-style graphics? That’s incredible.

RPGs and the Case of the Missing Experience: A Paper Mario Story

I’m about ten hours into Paper Mario: Sticker Star. For the most part, I really like it. It brings back the turn-based RPG battles of the first two games and leaves out the failed jokes and forced third dimension of the Wii’s Super Paper Mario which, frankly, felt unplayable to me, for a variety of not-quite-tangible reasons. This is lucky; given the name of the platform it’s appearing on, it would have been all too easy to rehash the 3D mechanic in this latest entry.

The level-up system is a bit strange to me, though, in that there is none. You find new one-time-use stickers mostly by random spattered throughout the world, and the only thing that ever increases throughout your dozens of battles is the number of gold coins in your pocket. And, since you can only buy too-weak or too-strong stickers (making the bosses either too hard or too easy), you end up not buying anything, instead relying on the weaponry you find in the field almost exclusively. With no levels to increase, and not enough things to spend your money on, Nintendo has given us no reason to fight any battles. This is less than ideal. And it’s all in the name of simplicity. END_OF_DOCUMENT_TOKEN_TO_BE_REPLACED

Liberation Maiden is by far the least weird Suda51 game. I mean, sure – there’s still flying robots and *gasp* a female president, but compared to Killer 7? No More Heroes? Using those as Suda’s typical benchmark, this is about as tame as games get.

This time around, Suda and Grasshopper Manufacture teamed with Level 5 to “bring AAA production values to the downloadable space.” For $7.99, you get a flying mech shooter game with solid voice acting, sharp graphics, and Rez-style gameplay that wouldn’t feel out of place in a third-generation PS2 game. All they put into the game comes at a price, however – it’s only about an hour long. END_OF_DOCUMENT_TOKEN_TO_BE_REPLACED

I’ve written before about my love affair with physical media. The look, the feel, the smell, the touch. But Paper Mario: Sticker Star comes out today, and instead of driving allllll the way over there to pick up a copy, I’ll be downloading it from the 3DS eShop for $39.99, while I sleep. I will receive no physical manual. I will have no spot for it on my shelf. I won’t even be able to re-sell it if it sucks.

Never fear: I haven’t given up on the good ol’ hard plastic cases. I thought too long and too hard about this, and I made an exciting list of the reasons why – at least in the case of Sticker Star – I’ll be eschewing the tangible for the digital. This is the first full retail game I’ll have ever paid for and not held the physical game in my hand afterwards. Sure, there’ve been lots of full free PS+ games, but this is a big deal for me! END_OF_DOCUMENT_TOKEN_TO_BE_REPLACED

Seriously, How Unimportant Is Sound in Handheld Games?

I’ve been playing my shiny new 3DS (well, it’s new to me) long enough to determine that, at its heart, it’s really just a better DS. It’s not trying to reinvent the wheel; Nintendo just stuck with what worked, and gave it better graphics, a simply terrific analog stick, and some 3D-ness. One thing in particular I had hoped they would improve, however, is the audio. The speakers are much better, for sure (have a listen on Nintendo Video or Netflix and compare it to any DS game if you don’t believe me), but I still have exactly zero qualms about playing nearly any game with the sound off. When I think back to some of the incredibly catchy melodies from the original NES – over 25 years ago – this lack of advancement in the sound department is simply unacceptable.

This is one area in which Sony has always excelled – the PSP and the Vita have some pretty great speakers, and the games on those systems recognized that fact, so much so that investing in a decent pair of headphones to play games is actually recommended. (I’d expect nothing less from the creators of the Walkman.) The higher-capacity UMD format helped too, I think, as did the ability to play PSOne Classics on the systems. The CD format and the original PlayStation is when game technology finally made it possible to do sound design, spoken dialogue, and full orchestral soundtracks by real full orchestras justice, and the disc format has helped every console since do more with their games’ sound and music. But the 3DS and DS aren’t disc-based. END_OF_DOCUMENT_TOKEN_TO_BE_REPLACED