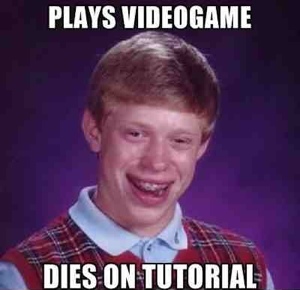 For me, the hardest part about motivating myself to start a new game is actually the process of starting a new game. There’s a whole new set of mechanics to learn and a new set of controls to master. That’s probably one of the reason sequels do so well, honestly – there’s far less of a learning curve. It’s less scary.

Games nowadays – what with all those buttons! – can be daunting. And that’s coming from me; I’ve been playing games since around the time I first learned how to walk. I can only imagine how bad it is for a newcomer. Now that the traditional instruction manual is a relic of the past (if you get more than a black-and-white controller diagram in your game box, you’re doing pretty well for yourself in 2012), tutorials combine with the “How to Play” section of the Options menu to teach us exactly how to get started with our new purchase. But some developers just don’t do tutorials well. I’m looking at you, Nintendo.

I replayed The Legend of Zelda: Link’s Awakening DX over this last week, and I enjoyed it far more than any Zelda game from the last dozen years. I actually finished it! I tried Twilight Princess again around a month ago, and after about two hours, I got bored and turned it off. The problem is that my time spent on those first two hours was filled with boring exposition and teaching me that, “The control stick is used to run!” Skyward Sword, with the Wii Motion+ stuff, is even worse. I don’t need three hours to re-learn how to play a Zelda game, guys. Gimme a sword and shield, tell me which button(s) use items, and drop me in a dungeon. The story has never mattered that much, or really even changed. The Zelda games are the only dungeon crawlers where the dungeon crawling is the most interesting part. Give me more of that, and less of the other stuff.

Twenty minutes into Link’s Awakening, I already had a sword, a shield, and I was digging into my first dungeon. I don’t think it’s just a console vs. handheld difference, either. A Link to the Past on the SNES was just as easy to get into. It just seems that, as the years have gone by, Nintendo thinks that the people who play Zelda games have gotten dumber and dumber. That, or Nintendo has simply forgotten how to open a game in a way that entrances gamers within the first hour.

This is the age of instant gratification. Between meaningful console experiences that are entirely contained within two hours (Journey), iOS games that last a scant five seconds before death, encouraging you to play them over and over again (Super Hexagon), and 100-hour adventures that drop you right into the action with no more exposition than a few blood-stained words scrawled on the floor (Dark Souls), we should expect more out of Nintendo. I mean, come on – they’ve been doing this for years. They have no problem crafting some fine games – just take a gander at the MetaScores of their first-party offerings from any point in time – but I want a game I can enjoy right now. If you can’t offer that to me, I just won’t play Zelda games anymore. And that will make us both sad, Nintendo.

On the other side of the spectrum, though, we have the Mario titles. The two most recent games in the main Mario series, Super Mario 3D Land and New Super Mario Bros. 2, are both 3DS games, but neither had much in the way of a tutorial. The problem with that, however, is that neither game brought any advances to the series, and both games felt incredibly stale. Maybe you don’t have to explain your mechanics if they’ve all been seen a million times before? But there needs to be a balance.

People new to either series will probably have none of these qualms. But… can you imagine how weird it would be if your first Mario game was Super Mario 3D Land, or the first Zelda game you ever played was Skyward Sword? With new gamers being born every day, I’m sure that, for some people, this is true. But I feel that even first-time gamers wouldn’t need a three-hour introductory sequence.

Yes, the control stick moves my character on the screen. Of course, the A button does the action you’ll need to do most. Even if we’d never played a single game before, we could understand that. When Shigeru Miyamoto was designing the very first Super Mario Bros., he understood this. One way forward, you instinctively jump out of the way of enemies. The blocks impede your jump and make your squish the Goomba. Within seconds, you not only know how to play the whole game without any on-screen prompts, but you were legitimately taught. Wordlessly, intuitively, with respect. I wish it felt like Nintendo respected my time or intelligence today.