RPGs and the Case of the Missing Experience: A Paper Mario Story 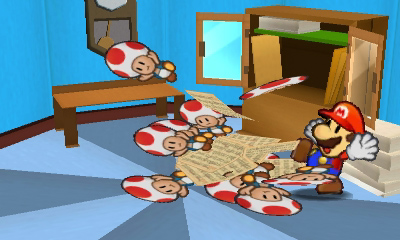 I’m about ten hours into Paper Mario: Sticker Star. For the most part, I really like it. It brings back the turn-based RPG battles of the first two games and leaves out the failed jokes and forced third dimension of the Wii’s Super Paper Mario which, frankly, felt unplayable to me, for a variety of not-quite-tangible reasons. This is lucky; given the name of the platform it’s appearing on, it would have been all too easy to rehash the 3D mechanic in this latest entry.

The level-up system is a bit strange to me, though, in that there is none. You find new one-time-use stickers mostly by random spattered throughout the world, and the only thing that ever increases throughout your dozens of battles is the number of gold coins in your pocket. And, since you can only buy too-weak or too-strong stickers (making the bosses either too hard or too easy), you end up not buying anything, instead relying on the weaponry you find in the field almost exclusively. With no levels to increase, and not enough things to spend your money on, Nintendo has given us no reason to fight any battles. This is less than ideal. And it’s all in the name of simplicity.

Thinking back on another excellent Mario RPG – GBA’s Mario & Luigi: Superstar Saga – I remember the leveling system being a big motivator. When you earned enough experience to level up, you got to pick which stat you wanted to increase, letting you fine-tune your Mario brothers into any breed of fighters you wanted. And the options weren’t limited to just Attack/Defense/Star Power, either; you could pick from HP, BP (Battle Points – basically MP), Power, Defense, Speed, or ‘Stache (the Luck stat). If Luigi wasn’t stomping as hard as he should be, give him some Power. Mario getting hit too hard? Defense. They weren’t set increases, either. If I remember correctly, each time you picked a stat to increase, there was a dice roll to determine how much it would go up, with bigger numbers possible on attributes you hadn’t leveled recently. Everyone had their own secret method to get the big rolls.

Sticker Star has none of this complexity and customizability. The RPG elements are pushed so far back that this is barely even a role-playing game in the traditional sense at all. There is no equipment to wear, or teammates to recruit, or sidequests to complete besides the “collect every sticker” one. It’s very much on the “action” side of the action-RPG spectrum. It’s not a bad game, not by a long shot. The problem I have with this is that seemingly every game released today shares the same mentality. “Don’t overcomplicate it.” “Streamline.” “Gamers want action, not numbers!”

But why dumb it down? For the children? Gamers love RPG stuff. You can follow one player through an entire 20-year football career in Madden. You level up by the way of perks, loadout options, and new weapon accessories in Call of Duty and (now) 343’s Halo. And then there’s one franchise that has only been adding complexity for years, and it’s aimed squarely at kids. It still sells like gangbusters, too. Yep, I’m talking about Pokémon.

When those little Pocket Monsters first hit the scene (when I was… 11?!), the world was taken over. Every type of media. Every type of person. We all spent hours, days, weeks building our perfect team, keeping in mind levels, strengths and weaknesses, abilities… the works. There were 151 originally, and now? 649. And there’s breeding. And weather. And wi-fi battles. And traits/personalities. It’s still the same world, but the depth has increased tenfold, and both kids and adults still eat this franchise up like a fat guy at a China Buffet. And nobody is confused. Gamers are smarter than developers give us credit for. (I know how to hold the controller, Skyward Sword…)

Paper Mario: Sticker Star, instead of deepening the gameplay options, went the BioWare route: more hands-on action, less customization. In some instances, like Mass Effect 3‘s combat (ignoring the ending), it works. Sometimes so well that, like in ME‘s case, it makes the first game nigh-unplayable. Other times, shearing away the depth for a more in-your-face-intense sequel removes the very essence that made the first so endearing. See: Dragon Age II.

I don’t want that to happen to Paper Mario. They’ve already cut teammates, counterattacks, and paper-based exploration abilities like rolling and slipping through cracks. When will it end? And how many sequels will be progressively watered-down until the soul of the N64 original and the amazing GameCube sequel is no longer even discernible?

I’ll no doubt enjoy the rest of my time with Sticker Star. However, it’s walking a very fine line, and the next game in the series has the choice of either bringing back the traditional RPG elements – literal “role-playing” mainstays from the pen-and-paper days that have been sorely missing in many modern RPGs, especially the Western ones – or drift even further into full-on action game territory, with a huge chance of failing miserably like Super Paper Mario.

It’s interesting that the Paper Mario devs get this choice for the future of their series, when the choices they give to their players… well, we don’t get choices, do we? At least the jokes land this time.

4 responses to “RPGs and the Case of the Missing Experience: A Paper Mario Story”