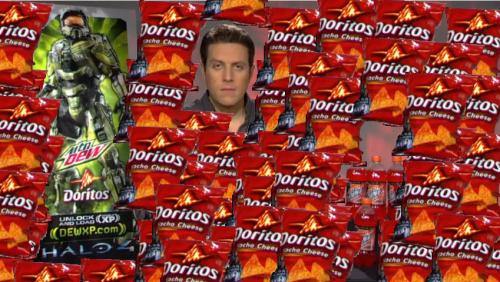 It’s been a fun few days in the world of game journalism, by which I mean everything went to crap at once, a lot of people got mad, and one guy no longer has a job. And there’s already been lots of words written about this, but these are mine, so they are the best. Full disclosure: they might not actually be the best.

First, the picture above started circling the interwebs (slightly edited to be even more accurate) of a dead-inside Geoff Keighley, surrounded by Mountain Dew Game Fuel and Doritos. He is one of the biggest names in game journalism, and this image is important and iconic not just because it shows how corporate we’ve all become, with our Halos and CoD-pieces filled with Gamer Fuel-soaked jerk socks, but because it shows exactly how the typical internet person views game journalism today. It’s rare to find an image that so completely embodies the glory of what game writing has become in the eyes of the typical 13-year-old Spike Video Game Awards viewer. (Well, maybe this one.) Sure, lots of games writers have fans, followers, readers, watchers… but one negative review of a game that other people loved and they’ll turn on you like *snaps fingers dramatically* that. And don’t forget how a good review means you were paid off by the publisher!

In the case of Rab Florence, I had not heard of him before he wrote an opinion piece on Eurogamer criticizing the Doritos image and the dismissive, I-don’t-see-anything-wrong-with-this-picture culture surrounding it (his article has since been edited). Not only that, but he talked at length about the Games Media Awards which had happened the night before (Edit: they were actually the WEEK before. My bad.), and how certain writers (which, apparently if I name, I will be threatened with a lawsuit?) were lacking in journalistic integrity by drunkenly advertising games on their Twitters in exchange for entering to win a PS3 from the PR people running the award show. Well, I say advertising (which is what it was), but it could have been genuine enthusiasm. But you’re already at a show designed to give you an award for saying good things about the games made by the people running the show. It’s kind of hard to not smell bias there.

You know what? Too bad.

“Integrity in game journalism” is a thing that everyone wants, but so few can actually afford. Game magazines and websites, almost without exception, are supported by ads, and these ads are usually of the exact same games they happen to be talking about on the site. And know why? It’s because people that read game websites and magazines are interested in buying games. New games. And new games are talked about, and advertised, and do you see where I’m going with this? Together! There is no separating bias from anything we do in our lives, and in order for the big sites to have people that can make a living wage while doing nothing more than writing about and playing video games, they need money to pay the writers with. The easiest way is hits-based compensation fueled by ads… which pay more if you get more hits. It’s a vicious cycle with no room for slow-burning quality because being “FIRST!” makes the most money. We’ll edit it in post!

The answer? You read blogs like this one, which are written for the love first and not for the money at all. There is no money. You find tiny game blogs without budgets, where the writers maybe don’t have the behind-the-lines experience of the big fancy guys that write for Polygon, but the words are always from the heart because what PR guy in their right mind would send this guy a free game to trash talk to his 200 readers? The big sites have their place (gotta advertise somewhere, I guess?), but don’t discount the little guys with nothing to lose.

To me, having integrity means a) not lying to your readers, and b) not lying to your readers. Did a famous game journalist say she was excited about the new Tomb Raider game in order to win a console that she already owned? Yep! Is it any different than her reviewing the game when it comes out, even after we all know how excited she is for it, whether the enthusiasm is legitimate or not? Sure ain’t! What if she gets it for free, should we not believe her then? What if she has to pay for it, then would her words sound more truthful to us plebeians that have to pay full price for new games? Does all of this distract from the fact that we’re all just talking about FREAKIN’ VIDEO GAMES??? Yes. Yes it does.

The fact of the matter is that the reviews we read from the big sites, the Kotakus, the Destructoids, the Eurogamers, the IGNs, the GameSpots… the games in these reviews are all provided for free by the publisher. And the fact is that the person playing that free game is playing a video game so he/she can tell us readers whether or not it’s worth our hard-earned money. The reviewer, in many cases, would rather be playing a game they weren’t being forced to play for work. And when you get just SO MANY free games, when you’re up in the game journalist elite with your Steam press accounts and your mountains of swag taking up every crevice in your tiny apartment that you are forced to live in because you can’t afford a real house, it gets to be more of a hassle than a gift. “I wish I got all the new games for free!” you say. Look at your Steam library. You don’t even have enough time to play all the games you have.

So. Game journalism. The bottom line is that if you write for the publishers and the advertisers instead of for the readers, the readers will figure this out. Then you won’t have anyone to advertise to anymore. Some people try to get away with doing whatever they want by hiding behind the term “blogger” instead of “journalist.” For example, I’m not a journalist. I have no formal journalism training; I was a creative writing major in college. And it’s awesome. I have some readers, and some of them even like what I have to say because I’m honest and I say what I feel, even if they might not agree with it. That gives me an obligation to treat my readers with respect, to not mislead them for my own personal gain. But besides that, I’m kind of all over the place, doing whatever I want, let’s be real. Sure, very few of the game journo big shots mislead their followers intentionally. But what if a publisher flew me across the country to try their new game, then took me ATV riding and gave me a fancy dinner in a futile effort to win me over, trying to get me to like their awful 4-wheeler racing game? I’d have a terrific time. But would I say their awful game is bad? AHAHAHAHAHA of course I would. And that’s why I don’t get invited to GMAs or ATV riding preview events. Because screw those guys. You don’t want to give me a free game? Fine, then I won’t play it. Or maybe I will. I’m pretty much just a random assortment of doing whatever I want, because it’s just easier. I’m not a journalist. I’m a GAME JOURNALIST!

I spend $18 a year to keep DigitalGumballs.com on the internet, then I invest as much time into it as I want because writing and talking about games is what I really love to do. It’s the only thing I could ever consider myself a real expert in, but I make no allusions to anything otherwise. Sure, I love digging deep into certain aspects of games and doing something resembling real investigative journalism sometimes, but mostly I shoot from the hip with this wild stream of consciousness that is anything but corporate. I eat Doritos and drink Mountain Dew because they are delicious and keep me awake in the middle of the night while I’m at my real job. When I love a game, I say so. When something in the industry sucks, I say so. Expecting enthusiast press – because, really, that’s what we all are – to hold ourselves to the same journalistic standards to which we hold something like the New York Times is unrealistic and silly. Of course we like getting free games. Of course we love free airplane rides in coach, the latest broken military shooter, and fancy meals at Burger King because we can’t afford the Olive Garden – we’re only game journalists. Note how that doesn’t make any of us real journalists. It’s just a bunch of dudes talking about games, knowing that if we say the wrong thing once, the entire world might never trust us again. And then where would the free games be?

Game journalism is a bunch of people saying what they think, a few people doing it well, and a whole bunch of other people telling them how much they suck at their jobs and saying, “I can’t believe anyone got paid for this!”

Sometimes you name names in a story you write, and then you don’t write for Eurogamer anymore. Sometimes you review a Kane and Lynch game honestly, then you have to go start Giant Bomb. The moral of the story? I dunno, man, I’m just writing about games over here. Oh yeah, and of course I’d take a free PS3. Who wouldn’t? A man can’t live on free Doritos and Mountain Dew forever.

Read some things other people wrote about this topic, too: here, here, and here.