24 Hours With My New 3DS: The Things I Wasn’t Warned About 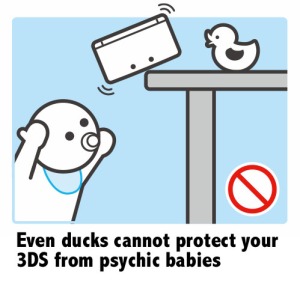 And that is the story of how I finally, finally joined the 3DS Owners Club.

It’s pretty cool. It does almost as much as my iPhone, and with graphics that are almost as good. Also: buttons! Screens! But there are a few little unforeseen quirks, possibly because Nintendo is one of those rare companies that has lived in its own little world, it’s own little bubble separated from the rest of time, space, and society, for the last hundred-or-so years. It is arguably the best (if you go by quantity and quality of games) – and definitely the most important – handheld system on the market today. What has my first day been like in 3DS Land? Well, it might have been a lot like yours. And if you don’t have a 3DS yet, well… there are a few things you should know first.

Nintendo’s online still suuuuucks. Have you downloaded even one Virtual Console game from the Wii’s or DSi’s online store? It takes For. Ever. Not just the actual downloading, but even a task as simple as searching through menus. You slide from one downloadable game choice to the next, one at a time, waiting for the thumbnail image to appear, like watching porn on a 56k connection. It’s kind of entirely infuriating. And this is marketed to kids, the most ADD of the protected classes. Do they have an extra three seconds to waste waiting for each and every game description to load, one after another? Not me. I gots goombas to stomp and zombies to shoot.

Even though New Super Mario Bros. 2 is downloadable, there is a warning telling you that it’s going to literally take YEARS to get it onto your SD card. Maybe that’s why only 5% of the Japanese NSMB2 sales were digital. Luckily you can queue downloads to a “Download Later” shopping cart, letting you fill up your memory card while you and your 3DS are both in sleep mode. As long as you don’t intend on playing anything while it downloads. What do you think this is, an Xbox 360?! Luckily:

The best games aren’t playable online anyway. This is less than ideal. Here’s the list of the 14 online-ready games, and some of these haven’t even been released yet. Plus you’d still have to be on wi-fi (just like the Vita), so – unless you jailbreak your phone to give you a laggy, on-the-go hotspot – you’ll be trapped either at home or in a Starbucks. And if I was home, I’d play the console attached to my big TV. You know… my home console. And what’s worse?

It only includes 2 GB of memory. But compare this to the Vita, which doesn’t even include a memory card unless you drop an extra $50 on the 3G model, and the big 32 gigabyte cards are $80-100. Luckily (and generously!), Nintendo decided to go with the ol’ classic standard SD cards instead of creating a new proprietary jerk-stick like the Memory Stick Pro DUO for their fledgling system. Sure, you can’t charge Whole Foods prices because you’re the only card supplier, but consumers are a lot happier paying $20 for 32 GB, even from a third party. And Nintendo is all about happy. Plus, how many “regular people” will ever need more than 2 gigs of space for the 6-7 games they’ll buy over their handheld’s lifetime? Note: if you’re reading this blog, you’re not one of the regular people. You’re one of the cool people!

Oh yeah, let’s talk about the 3D. Shortly after the 3DS’s launch, the headache claims started to come in. Then the fake doctors said that using the 3D too long will make your babies go blind or something. It got so bad that now Nintendo attaches a warning label on each piece of software saying that the 3D is only for players aged 7 and up. Not sure if the parental controls can lock out the 3D…? Hmm. That seems like a thing that would make parents happy, right? Either way, Ninty’s sales dropped like crazy.  They refocused their entire ad campaign to focus less (i.e. not at all) on the 3D aspect and instead focused on the games which – eventually – started to release. That first six months though? Woof. Glad they had an ambassador program to appease the early adopters. After Nintendo shanked them. In the heart.

Personally, I haven’t had any eye problems yet. Not a one. And I keep my 3D turned all the way up just for the novelty of depth in my Mario. The thing is: the 3D is just that. A novelty. An unnecessary gimmick. We’ve all been playing three-dimensional games for so long that both game designers and players have developed a pretty solid sense of depth perception in our 3D worlds. We don’t need the added layers of parallaxed dimensions. If anything, popping the 3D slider all the way to the top let’s me know REAL quick when I’ve relaxed my hands and arms too much, letting the game slip out of the 10-15-degree viewing angle necessary to see one cohesive image on the screen. I enjoy playing just as much in 2D mode, but that honestly feels more blasphemous than driving a Mini Cooper with an automatic transmission.

The 3DS seems to have started just like the first DS, or the Wii. There’s a lot of new and different things that can be done with a second screen, motion controls, or even a whole extra freakin’ dimension. Nintendo needs to lead the charge with their first-party offerings, and show everyone else what an almost-dedicated-gaming handheld (probably the last) is capable of in the right hands. Even if it fails, however, Mario games will never not be fun. There’s your reason to buy a 3DS right there.

7 responses to “24 Hours With My New 3DS: The Things I Wasn’t Warned About”